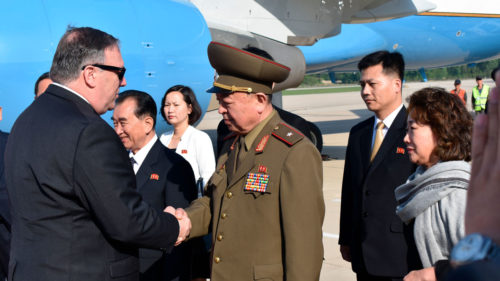 The New York Times viciously slammed Secretary of State Mike Pompeo Tuesday, accusing the senior Trump aide of being “thousands of miles away” during the President’s Iran speech; despite the fact he was in North Korea negotiating the release of three prisoners.

According to Fox News, the Times blasted Pompeo for not being on hand as the President announced his decision to withdraw from the Iranian nuclear agreement; saying he was missing at a “key moment” of the Trump presidency.

“Senior State Department officials were momentarily speechless on Tuesday when asked why Mr. Pompeo did not delay his trip by a day to be in Washington during Mr. Trump’s Iran deal announcement,” writes the Times.

“The absence of Mr. Pompeo and other top State Department officials left perplexed European diplomats privately complaining that they were having trouble getting answers from Washington,” the author added.

It became clear by Wednesday that the reason Pompeo was “thousands of miles away” was to oversee the transfer of three American prisoners from North Korean officials to US custody.