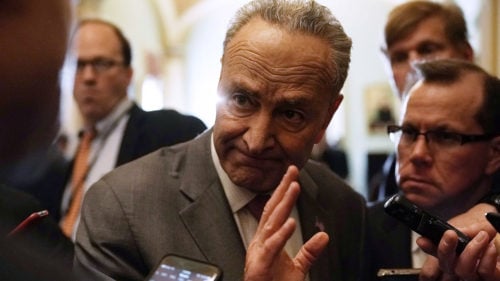 Schumer offered his scathing critique just hours after Secretary of State Mike Pompeo left the Korean peninsula with the three prisoners by his side; saying “No regime has the right to hold American citizens in captivity without cause, and under no circumstances should American citizens be viewed as bargaining chips.”

“If countries in the world think they can detain Americans and get something in return, we’ll see many more hostages,” he added.

The liberal legislator went on to say he was “rooting for” the Trump administration’s upcoming negotiations with the communist regime but added that “hostages shouldn’t be a part of it.”

The Pursuit of Happiness

Ken Webster Jr is a talk radio personality and producer from Houston, TX. He started his career in Chicago on the Mancow show and has since worked at dozens of radio stations all over the country. He’s currently the host of Pursuit of Happiness... Read more

This isn't even your final form

Today on #PoHRadio:-Impeachment-palooza continues-Hillary lied about rape (again)-Laughing at climate alarmists may soon be a crime-All your base are belong to us...

Anything but the impeachment