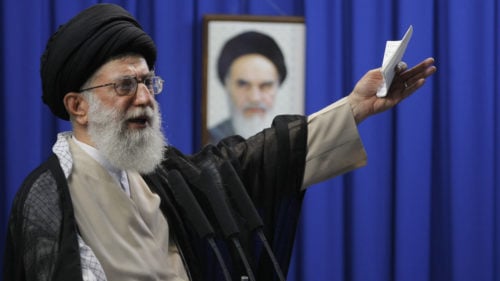 Ayatollah Ali Khamenei unloaded on President Trump and the United States Wednesday; blasting the American leader for his decision to withdraw from the Iranian nuclear agreement and warning Trump will soon be “worm food.”

According to Sky News, the Supreme Leader called-out the President during a fiery speech in Tehran, saying Trump “will turn to ashes and become the food of worms” just hours after announcing his decision to withdraw from the international pact

“The body of this man, Trump, will turn to ashes and become the food of the worms and ants while the Islamic Republic continues to stand,” said Khamenei.

The Iranian ruler went on to blast America’s European allies, saying he “wants to continue” the nuclear agreement but “doesn’t trust” Britain, France, and Germany.

“If you could get guarantees from them in such a way that they can be trusted, no problem then you can continue,” he added. “If you cannot get such a strong guarantee from them, and I see it very unlikely that you can, we could not move and continue like this anymore.”

The Pursuit of Happiness

Ken Webster Jr is a talk radio personality and producer from Houston, TX. He started his career in Chicago on the Mancow show and has since worked at dozens of radio stations all over the country. He’s currently the host of Pursuit of Happiness... Read more

This isn't even your final form

Today on #PoHRadio:-Impeachment-palooza continues-Hillary lied about rape (again)-Laughing at climate alarmists may soon be a crime-All your base are belong to us...

Anything but the impeachment