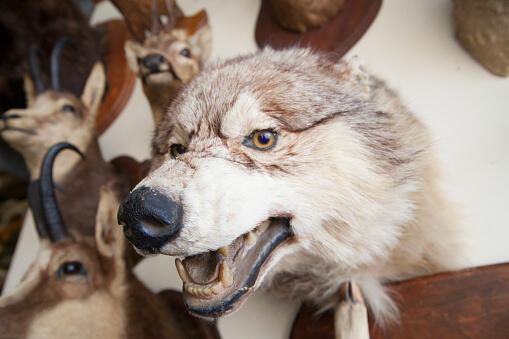 Someone Broke Into a House and . . . Rearranged the Taxidermied Animals Inside?

I understand someone stealing a radio. After all, it IS the world's best medium and always will be. But there's nothing else here that I understand.

A woman named Mindy Marshall in Girard, Ohio was remodeling her house. And when she went to check on it, she got a big surprise. Someone had broken in and stolen her radio.

Oh . . . and they'd also REARRANGED all of her TAXIDERMIED ANIMALS.

They moved a stuffed dear head right in front of the door. They also moved a boar's head. And they took her stuffed raccoon and put a BEER in its hands.

And the beer was still cold, so Mindy realized she must've just missed them.

Basically, she's just confused by the whole thing . . . she had other valuable stuff in the house that they could've grabbed, but it seems like they spent all of their time focused on rearranging her dead animals instead.

The cops are trying to track down the thieves-slash-amateur decorators.